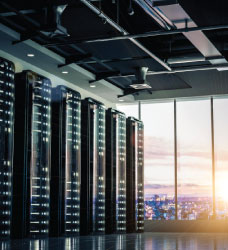 “Hello Client, how are you?" “Hello Broker, IT has asked CRE if we can help with their data center requirement."

"Of course, I’ve done that a bunch of times, I’ll stop by next week to discuss.”

Click! Damn! It’s time to search Google for how to find a data center. Nearly all brokers have received that call and like all brokers attempting to practice a new area of real estate, there are a number of stumbling blocks that you have or will encounter. Many of us have had a chance as we are visiting a client’s headquarters to see a data center or have marketed a property that has raised floor and not sure the value of the equipment or space left behind.

I was introduced to data centers and disaster recovery sites in the early 90s. In the late 90s I was fortunate to become quite proficient at helping many of the largest telecommunication companies with their site selection, and we rode that wave through the dot com bubble in 2001. In 2004, my new clients were leasing these fossils at pennies on the dollar, and by 2007, I became 100 percent focused on helping my clients ride the wave up.

There are a wide variety of data centers and the costs associated with them vary considerably. In short order, this will provide a general simple guide from traditional and most expensive to the newer types and less expensive. I will attempt to bundle them into five categories, but there is cross over among the categories and the landlords/service providers.

The 5 Types of Data Centers:

1. Enterprise Datacenters – This is the one that most of us are familiar with. It was owned and built by the end user to house its data center. Many companies still have their data center on the corporate campus and there are a handful of companies building one for their own use. This is not the most proficient use of precious capital. One of the most recent transactions is State Farm building a 130,000 sq. ft. data center outside of Dallas. Due to the favorable U.S. tax law, Reid McConnell Tax act, 2011 is when the most recent wave of corporate data centers were built. Companies spend between $1,000/sq. ft. and $4,000/sq. ft. on the construction based on the technical "white floor” space, although most of these figures today would be described in terms of power. Thus, $10 to $40 million per megawatt. For simplicity purposes, assume that the client will spend another $10 million per megawatt on servers.

2. Managed Services Providers – This was the earliest form of outsourcing which occurred when companies hired AT & T, IBM, and HP. This has evolved and there are a number of managed services providers that let companies manage some, or all, of their data center functions. This is more typically handled by IT and Corporate Real Estate is seldom involved.

3) Colocation grew out of the managed services business in the early 2000s as companies were willing to outsource some of their operations, but still wanted to have their own employees maintain control. Certain companies (i.e. financial institutions, healthcare, etc.) who are highly regulated are required to maintain complete control of their IT functions. This is a question you should be asking your clients. Thus, companies lease one rack or one cage from a provider and their employees are responsible for doing much of the work within the space. Many of these sites have the added benefit of being able to connect with another companies servers, thus cross connects. Thus if you are a trading firm you want to connect with a financial exchange to facilitate trades. Pricing is based on a per rack basis and there are a number of ala carte items that companies can purchase such as cross connects or remote hands. One of the largest colocation providers is Equinix, although this type of business model exists in nearly every mid-size U.S. market.

4) Wholesale data centers became popular in 2007 and 2008 as some companies such as Facebook, Microsoft and Yahoo needed more than just a rack or a cage, but wanted a much larger space and often times didn’t have enough time to build a new site. These facilities are commonly referred to as multi-tenant data centers (MTDC). The tenant space within the MTDC is traditionally a 10,000 sf hard walled suite, sf and companies are charged based on the amount of power allocated to them. There are some variable costs associated with these properties, but this is significantly less expensive than any of the aforementioned. Digital Realty Trust is considered the largest and these types of landlords tend to be mostly located within NFL cities. If a client signs a 1MW lease for 10 years the rent would be comparable to an office transaction leasing 60,000sf for 10 years at $28/rsf.

5) Cloud data centers have become more popular in recent years and the popular providers include Amazon (AWS), IBM (Softlayer), and Microsoft (Azure). Many of us are using the cloud on a regular basis and don’t realize it. Salesforce CRM is a private cloud and Netflix is housed at AWS. This is the most inexpensive form of data centers. While many of these companies build less robust data centers thus offering lower pricing, increasingly in the last two years they have accounted for significant leasing from the wholesale providers.

Determining the right solution for your client is no simple task and ensuring the right stakeholders are at the table is the most important thing to do first. Similar to your day job, understanding the goals and objectives of the task at hand are key to a successful data center transaction. This is when the laundry list of questions becomes quite robust. Cost? Latency? Lease? License? Application? Disaster recovery or primary? Application within business (i.e. production vs. storage vs. email)? How many racks are needed? What is the density of racks on a kw basis? What is the projected growth of this particular business? Geographic restrictions? What type of redundancy are they looking for? N? N+1? 2N?

One solution does not always work. In fact some of the largest companies use each of the aforementioned data centers depending on the need of the internal business unit. These often are located in different parts of the US and the world. In fact some companies are federally regulated as to where or where they can’t store there information.

Believe it or not, coming up with an RFP is usually rather simple or the landlord will do so for you. Creating a spreadsheet that incorporates all of the various scenarios and comparing on a like basis is the hard part. Is this a gross, modified gross, NNNN (Quad Net) lease? How do you take into account for PUE, spike in property taxes related to a change in use, replacing equipment, electricity that is passed to the tenant? Do you have comps? Good luck, as finding reliable comps is nearly impossible.

Negotiating the lease document can also be quite treacherous and it is helpful if you have an experienced attorney. There can be a number of “gotchas” if you don’t know what to look for and I have found that having the involvement of my client’s IT person is one of the keys related to where the handoff from landlord to tenant takes place.

As all experienced SIORs know, having a commission agreement and your client covering your back is more important in this space than any other. It’s still a bit of the Wild West and you need to insure that all of your hard work is going to be rewarded.

Finally, now that you are the expert, don’t assume that whatever property you have is the next greatest data center. In general developers that are reusing assets are looking for larger properties that have significant power that can be brought to the site (1 MW per 20,000 sq. ft.), clear heights in excess of 15 feet, fiber in close proximity, concrete not timber construction, away from any hazards such as airports, lakes, and highways. The developers have limited capital and if the second largest operator hasn’t spent capital in Dallas, it is unlikely that they are going to add a salesforce to Mayberry just because Barney Fife is providing security.