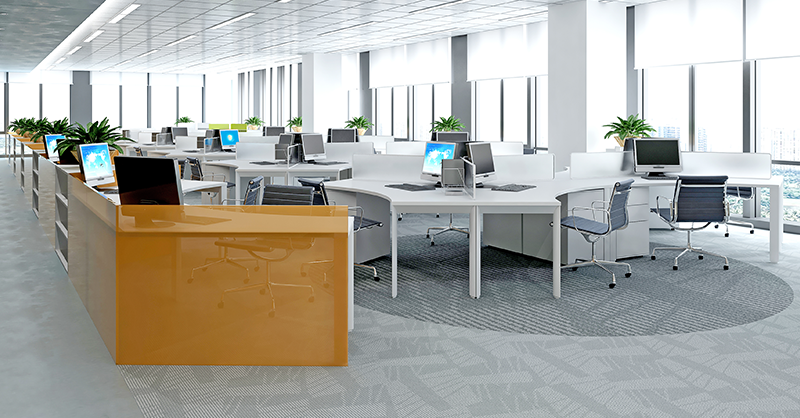 As the modern workforce continues to adapt, today’s offices are coming along for the ride. Contemporary workspace design has gone through massive transformations, changing as each new inspiration hits the mainstream.

The latest trend that dominated working culture was the open-concept office. While this free-formed template was met with immediate approval, it’s now time to question its long-lasting relevance. Let’s examine the benefits and drawbacks of the open office scheme, as well as its place in the 2020 professional world.

When we think about traditional office spaces, the first thing many think of is the standard cubicle layout. For years, these ‘necessities-only’ boxes defined the work experience. Many believe that the open-concept office was invented to replace this outdated design scheme, when in fact the open office predates the cubicle.

George Musser, who wrote the Scientific American, elaborates: “They were invented by architects and designers who were trying to make the world a better place—who thought that to break down the social walls that divide people, you had to break down the real walls, too.” As early as 1939, famous architect Frank Lloyd Wright was designing offices that had no partitions; but were instead divided by thin columns, storage, and elliptical desks.

While this is a noble ideal, it was quickly driven to the extreme; and the pendulum swung back towards refined order and division—resulting in the famous cubicle.

About 60 years later in the early 2000s, we again rejected the walls and turned towards open design. It was reported in 2014 that 70% of offices had open floor plans. However, it seems there are some fundamental issues with the widespread adoption of the open workspace.

A Recipe for Distraction

Today’s professionals are indeed looking for something more engaging than closed-off cubicles, but when does it become too much?

While the driving force for transitioning into an open office plan is to increase collaboration, cultivate team member interactions, and boost productivity, many have found the setting to cause the opposite results.

The Harvard School of Business conducted a study in 2018 measuring the results of open workspaces on team member interactions. The results were shocking, showing that face-to-face interactions reduced by 70%, while email messages increased by 50%. The group concluded that open offices nullified team member’s needs for socializing and instead sparked a desire for personal time.

While some people work well in high-intensity settings, others need seclusion. Overall, employees usually don’t like open offices. They’ve found them to be loud and distracting, and with so much stimulus surrounding them, it’s hard to get work done. A study found that 90 minutes per day were lost due to distractions. Rather than boosting efficiency, open plans can reduce it.

Finding the Perfect Approach through Flexibility

When contemplating open office design, it’s important to remember that everybody has a unique working style. It’s not a ‘one size fits all’ situation, so a level of flexibility is required to reach optimization. Open spaces are ideal for meetings, collaboration projects, and break-time. However, private spaces are needed for personal tasks that require intense concentration.

The most effective offices will need both open designs and private areas, according to WeWork’s Director of Workspace Strategy Liz Burow. “People have different needs throughout their day and their life,” she says. “They might need to focus at a certain point and talk to someone at another point.”

Where do you think open offices fit into today’s workforce?

Is the Office Workplace Dead?

4 Red Flags to Watch For When Signing a CRE Lease