A Secondary Market: with Clout! 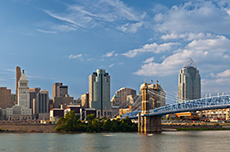 Too often in the last 25+ years we, who wander the halls of industrial real estate brokerage in Cincinnati and Dayton, have been told that we're in a secondary market, that anyone investing here has to add (pick a number) basis points to his/her return to justify the higher risk, the lower market fluidity, the rust belt character, sometimes the union influence, the lack of a good route east, etc.

Things have changed a little. Maybe a lot. There's a pretty strong history since then of national developers building spec buildings, of strong institutional interest in some of our newer investment buildings, and in recognition of "automotive alley," the huge influence of I-75 from Canada to Florida and the billions - yes, billions - invested in US automotive plants by both foreign and domestic producers. Today, with new car sales rebounding from the '08 doldrums of 11 million units to the old norm of 16 million units, this is more important than ever.

And then look at what happened in the recession. There's an old saying that if you redistributed all the word's wealth evenly to everyone, that in a matter of a few years the same people would end up with most of it again. In 2008's market collapse, as in all previous market corrections (though this one was much worse), the over leveraged and overpriced properties all hit the wall, and were gobbled up by those who had the capital and foresight to see into the future. For years this distressed sale frenzy went on, pushing values lower and entrapping the next layer of owners into distress.

Of course, the targets were in the sexy markets; NY/New Jersey, Chicago, LA, Atlanta, Dallas and Houston. Sure, the same thing happened in secondary markets, but much of the activity was with local buyers. National attention stayed in the safe haven markets.

Until this year. Almost all industry analysts say the same thing. Cap rates and purchase prices have been driven so low (CAPs) and high (prices) that the value perception got squeezed to the point of searching for alternatives. Enter the secondary markets. To be sure, places like Indianapolis (Chicago Junior?), which my old Colliers/Cassidy Turley teammates were always so quick to point out vs. Cincinnati, were just a notch behind the major markets - and ahead of us. But there weren't many others who were and are. Cincinnati has clearly proven to be in the sights of the active national institutional investment community, and very definitely perceived as a place to go vs. the primary markets and their "scraps."

So, you would think, then, that there'd be a frenzy of spec building going on. It always happens in cycles like this. And truthfully, there has been a frenzy in Louisville, a small market elevated in importance by UPS, in Indianapolis (where one developer sold a new spec building empty for the same return expected in the pro forma for a fully-leased building), in Columbus, and in other mid-western markets.

But not so much in Cincinnati. Why?

As you'd expect, there's not one easy answer. It's partly for the lack of good highway-near sites, partly because those previously active in the market (Prologis, First Industrial, Duke, Opus) are no longer. But there's one who is, and it's perhaps the main reason there is not more spec construction in the Cinci market.

IDI, for a variety of reasons, controls and owns almost all of the good land sites in the market. At present, they have the only new spec large bulk buildings available in the market, with 2 over 400,000sf being constructed. As a matter of fact, the only other spec building having been constructed (by VanTrust) is a 274,000sf facility near the airport, and it's a one-off site. For the foreseeable future, IDI, a very-high-quality merchant builder, has a corner on the Greater Cincinnati market. This is pretty unusual and may be unique in the USA today.

But there's a wild card.

If Indianapolis is so strong because of the confluence of so many Interstate highways (true) and if Columbus tops Cincinnati in bulk distribution because of its I-70 and I-71 cross hairs, then why isn't Dayton even better with I-75 and I-70? The answer in the past has been - at least partly - the aforementioned union influence from the history of GM and Chrysler. But, that's getting farther and farther in the rear-view mirror. Nobody has ever built a big spec building in Dayton, with Miller-Valentine being virtually the only developer even building as much as 200,000sf spec.

But, this could change. And soon. Prologis is in the process of finishing a 1.8 million square foot distribution center for P & G just west of Dayton's airport. Not far west of there Clayco built 2 mammoth facilities - a 600,000sf (expanded to 800,000sf before completion) facility for Payless Shoes in Brookville, and a 1.6 million square foot DC for Caterpillar Logistics in Clayton. The time may be coming for spec development for large facilities in Dayton. There are land sites with generous tax abatement packages available, and it wouldn't be surprising to see a trend develop in Dayton. Maybe not today - but someone will start - and the trend will begin.

Interesting business. Like with most in today's world, you can't stand still.......