While the 2017 SIOR Spring World Conference featured a number of outstanding sessions that ranged from educational to uplifting, perhaps no program brought a bigger smile to the faces of SIOR members than the “Economic Update & Market Forecast” presented by real estate economist Dr. Mark G. Dotzour. During a comprehensive program that covered everything from the effect that the new administration’s proposed legislative changes would have on the economy, to the failure of (most) media outlets to provide accurate information on which to build an effective business strategy upon, no statement was more welcome than this:

“Our economy still has room to run, and I think we still have two or three years to go,” he proclaimed. “The index of leading indicators show no indication of an oncoming recession, so if you’re looking over your shoulder, I don’t think it’s coming anytime soon.” 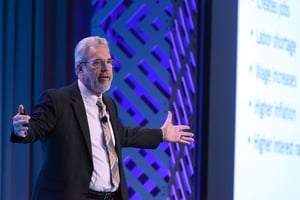 Dotzour began his talk by dispelling the myth that the U.S. economy is weak, backing up his assertion with hard numbers. The current U.S. unemployment rate is 4.5 percent, following 75 consecutive months of job growth. According to the Bureau of Labor Statistics, there were 5.6 million job openings as of March of 2017, up from 4.1 million just 18 months prior. And according to a survey of CEOs conducted by Business Roundtable in Q1 of this year, 41 percent of companies say they are going to be hiring in the next six months, compared to 29 percent in Q1 of 2016, with only 18 percent indicating that they were going to reduce staff, compared to 35 percent last year.

Other positive factors for the economy include a rebound for the oil and gas industries, a new bull market for single family housing, a surge in the consumer confidence index, an increase in capital expenditures by small businesses and a steady rise in corporate profits, which had declined slightly for a period beginning in 2015 before getting back on track in 2016.  He also predicts that there will be no radical movement on interest rates, but instead expects Fed Chair Janet Yellen to slowly and methodically ease the rate to a “neutral” two percent. “It isn’t expansionary and it doesn’t cause a recession,” he explained of the approach. 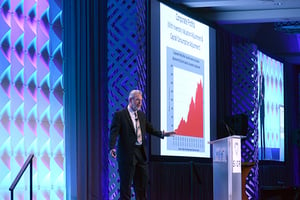 Dotzour’s confidence in the economy is shared by foreign investors, who continue to deploy capital in the U.S. in record amounts. Offshore entities in 2015-2016 purchased over $100 billion in assets in the top 11 American markets alone. “Everybody on earth wants to invest in the U.S. right now because there’s really no other option,” he said. Dotzour, whose own retirement fund has an 86 percent allocation of TIAA commercial real estate, provided the historic perspective behind his unwavering faith in CRE investments. Since the pre-crash peak of 2007, CRE pricing on the whole has increased by 23 percent, with apartments (52 percent) and office (50 percent) assets more than doubling in value. And since 2000, commercial real estate overall has increased in value by 117 percent.

“And that’s why I’m so bullish on real estate,” Dotzour concluded.