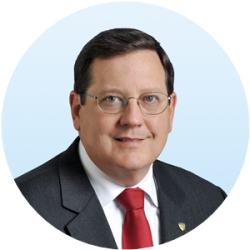 Twenty-five years ago, I earned the designation to become a member of the Society of Industrial and Office Realtors (SIOR). The pinnacle of this membership was when I served as president in 2016. This was a huge thrill for me as I was privileged to travel across the globe representing the organization. As I approach the end of serving a four-year term as a member of the SIOR Global Leadership Committee, I can look back with certainty and declare that joining this organization has been the best career decision I have ever made.

In 2016, SIOR held its first European conference in London, which also happened to occur at the same time as the Brexit vote. Also during my term, SIOR had its first chapter event in Mexico City for all our Mexico members from across the country. SIOR annually participates in the MIPIM Conference in Cannes, France, the largest real estate event worldwide. It has truly become a global organization.

Being a member of the SIOR Global Leadership Committee has allowed me to attend events across the U.S. and Canada and build relationships with real estate representatives that I would not have access to otherwise. The wonderful people I met, as well as experiencing the best of what many great cities have to offer, will stay with me forever.

There’s no question that SIOR is the best way to network with the top brokers across the country and around the globe. SIOR has two excellent conferences annually and great educational offerings. The North Texas chapter is a great way to build relationships with the brokers in and around the Dallas-Fort Worth area. There is also a candidate program for agents new to the industry that would like to become active members in the future, and an associate program for developers, corporations that use brokers, and other businesses involved in industrial and office real estate.

As the father of two daughters and the grandfather of three granddaughters, I am especially pleased that the number of women in the commercial real estate industry has exploded over the last several years. SIOR has had several exceptional women serve as global presidents; most recently in 2015, with Angela West from CBRE-Tulsa at the helm. At the most recent Spring World Conference in New Orleans, nine of the 39 new members were women.

With over 2,900 industrial and office brokers in 680 cities and 34 countries and billions of transactions reported among its members annually, SIOR is the designation every broker should aspire to obtain. You will undoubtedly be among the best in the industry, and you will elevate your game. Whether you’re a small, medium, or large global organization, it makes no difference; the advantages you will have over your peers is career changing.

Still Getting Deals Done During COVID