The new buzzword “Blockchain,” and what is means to Web 3.0, is fascinating.  With the rise of crypto-currencies, the world is watching how its implementation could revolutionize real estate, banking and finance sectors, creating crypto millionaires and a new way of doing business.

There is one component of Blockchain that can be applied broadly to the public at large: The idea of an exposed, public ledger that accompanies the Blockchain.

One area of real estate that can be disrupted by Blockchain is the execution and recordation of the sale and/or transfer of a property. Title companies are 3rd party administrators who add fees to the execution and recording of a closed real estate transaction.   The idea of running smart contracts on a Blockchain or public ledger eliminates the need for the 3rd party to verify and record the transaction.  In addition, this will eliminate unnecessary fees in the process.

A one sentence summary is that Blockchain is a decentralized public ledger that allows all participants to keep track of and verify transactions without the need for centralized Title Companies, County Records and County Recorders.  The advantage of Blockchain is its persistence, meaning that prior transactions are never deleted, and transparency.  Anyone can view a complete record of all processed transactions.  Imagine that as part of a due diligence process, the entire transaction history of a property is verifiable on an easily accessible public ledger.

The second amazing implementation of Blockchain is its rules for transaction processing.  This is already possible with more advanced forms of the Blockchain, such as Smart Contracts on the Ethereum Blockchain which can be set up to require multiple signatures or levels of rules for transaction approval.  Under these premises, the need to run a transaction through a Title Company will become obsolete over time.

The third component of Blochain consists of the key benefits to decentralization (verified by many nodes or servers) instead of keeping it in a centralized server/database:

Having records and data decentralized and deployed on a Blockchain makes it virtually impossible for any one party to tamper with data or records. Versus now, if you host your data on a private server, you can easily edit that file before you send it to someone else, so how can I ensure I can trust you?

Traditional servers or data are generally centralized, making it a likely target for malicious attacks. Just look at the Equifax’s security breaches and other cybersecurity concerns arising in recent times. Instead of having a single or limited number of servers that hackers can attack, decentralization via the Blockchain greatly increases the difficulty. The more participants/nodes in a network, the more copies of the data there are. Therefore, if you want to tamper with the data, you will need to attack every single node on the network and alter all of their data simultaneously. Not only does Blockchain make data tamper-proof, it is also hard to breach. Every “block” on a chain contains a certain amount of data, and when that block gets filled, much like a USB drive, it is encrypted and sealed forever.

You basically have the same set of data distributed across the world, so you don’t need to worry if you lose your copy. This provides data resilience to corporations, giving peace of mind from any data corruption, server downtimes, etc.

With all of the above in place, you can be sure that everything that is logged or deployed on the Blockchain, is accurate, and true.

All of this results in an ease of trust, and ease of the ability to do real estate transactions in a transparent manner, without needing to trust the counter-party. You can simply leverage Blockchain technology to let the data and facts speak for themselves.

Does closing a Real Estate Transaction at the Title Company and recording with the County Recorder work? Of course, but it is not perfect. They add fees and friction to the process. Title Companies only exist the way they do because there hasn’t been a technology that could come along and offer a vast improvement until the introduction of Blockchain.

Over the next decade, how real estate is transacted through smart contracts will be an exciting revolution in our industry. 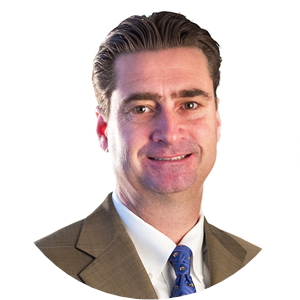 Get to Know Our CEO: Robert Thornburgh, SIOR